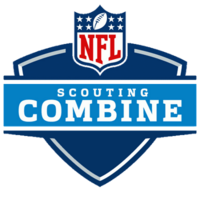 West Virginia will be represented by two former standouts at this year's NFL Combine. Najee Goode and Bruce Irvin will be in Indianapolis for the week-long scouting event. Both players join an impressive list of players looking to impress all 32 teams before the NFL Draft in April.
Goode had a solid final season at the inside linebacker position. He finished with 87 total tackles to lead the team. Goode also had five sacks, one interception, and a forced fumble. He has decent size, very good awareness, and solid tackling ability. He will certainly be looking to improve his speed, and show he can play in a base defense. CBS has him listed as a 7th round prospect.
Irvin is the sack specialist, who had his numbers drop a bit in his final season. However, most scouts will understand that he saw many more double teams this season than last. He still finished with 8.5 sacks and forced three fumbles. He also played many more snaps this season, totaling 40 tackles. Irvin has pure rushing ability, tremendous speed, and technique. Can he play DE in the league? Or is outside linebacker in his future? Look for Irvin to destroy some of the speed drills at the combine. CBS has Irvin as a 3rd-4th round prospect. If he has a good combine and pro day, he will go higher than that.
Snubs: Julian Miller and Keith Tandy both should have been invited. Miller had a productive career at DE for WVU. He is also projected to be a late-rounder. Meanwhile, Tandy didn't have the strongest final season, but does have a very good skill-set at CB, and is projected to be a mid-round pick.
Posted by Chris at 11:59 AM No comments:

Is the End Near?

It seems the end is undoubtedly near for WVU in the Big East. One of the big Mike Casazza nails it out of the park today, writing about the separation.
Casazza writes...

There's no way West Virginia dismisses Florida State unless the Mountaineers are absolutely certain they won't be a part of the Big East in 2012 and has a guarantee from the Big East. We could see that Thursday.

It could be that the two sides have already reached a proposed settlement and that they'll submit it to the judge that requested this hearing.

That judge will then agree or disagree with the proposal and make sure the terms are fair and equal for both sides and any third parties that may be involved and affected by the conclusion.

It seems that the biggest fact is the FSU angle. Casazza is right on the money with saying what he did about the FSU game. WVU would never sacrifice the game (and certainly the money they will have to give up) if they didn't have some clear indication the Big 12 is in their immediate future.

It would also be nice if WVU and FSU could clear this up quickly, so the story can be put out quickly. Casazza also points out that WVU could get away free, if FSU could find a comparable opponent.

No matter what happens, look for more news to break this week about the future.