So, what to get your Mountaineer fan for Christmas? Well throughout December we will giving you great ideas that would please any West Virginia fan out there. Let's get it on!
Gift 7. WVU 3-Piece BBQ Tools 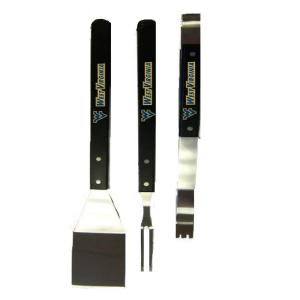 What grill is not complete without a set of fine looking grill tools? And, let us take it u a notch with grill tools that have a WVU theme. The flying WV make everything better, and there's no exception here. There's a good chance your grilled meat will even taste better, because of these. Available at Home Depot (Thanks Nick) for $22.99.
Archive
Gift 1: Bob Huggins Fantasy Camp
Gift 2: WVU Grill Topper
Gift 3: WVU Spirit Flag
Gift 4: WVU Duct Tape
Gift 5: WVU Pool Table
Gift 6: WVU ProToast NCAA Toaster
Posted by Chris at 10:54 AM No comments:

Flying Dub-V's Plays of the Year

Time to take a look back at a year full of fantastic performances and plays on the gridiron for West Virginia.
Game 1. WVU v Marshall: Tavon Austin's Kick Return. With a lightning storm nearing, Austin's kick return gave WVU some breathing room. After the delay, WVU would score again to make it an insurmountable lead and the game would eventually be called. It was a very timley score for WVU.
Game 2. WVU v Norfolk St: Ivan McCartney's 39 yard TD catch. Early in the fourth quarter, Sticks got loose. Geno was able to throw a perfect dart to Sticks in the end zone for the score. It was a beautiful pitch-and-catch
Game 3. WVU at Maryland: Eain Smith's Interception. Maryland was driving late in the fourth quarter, with a chance to win the game. The Terps were in Mountaineer territory, and the defense desperately needed to make a play. Enter Smith, who read Danny O'Brien perfectly, stepped into a throw, and picked the ball off on the six.
Game 4. WVU v LSU: Geno Smith's Perfect Pass to Tavon. This play shows the outstanding accuracy Geno can display. This ball is perfectly thrown to Austin, who nearly takes it to the house.
Game 5. WVU v Bowling Green: Dustin Garrison's Entire Performance. 291 yards says it all. An outstanding day for the kid.
Game 6. WVU v UConn: The Fumble Return. Halfway through the 3rd quarter UConn was driving deep into WVU territory, when Pat Miller stripped Johnny McEntee of the ball. Juwone Snow recovered it to go 84 yards. That set up a Tavon Austin TD catch, and it was smooth sailing after that. Just a huge play by Miller and Snow.
Game 7. WVU at Syracuse: Stedman Bailey's Acrobatic Catch and Score. It was an awful game, but at least Bailey gave WVU one thing to cheer about.
Game 8. WVU at Rutgers: Tavon Austin's 80-yard Reverse TD. While Geno Smith's TD late was the most important play, Austin showing off his speed on a frozen tundra was the sexier play to put on the list.
Game 9. WVU v Louisville: Stedman Bailey's One-handed Catch. This play was incredible, and it did keep WVU's hopes alive of a comeback. Sadly, they didn't have any Tim Tebow luck.
Game 10. WVU at Cincinnati: The Block. In the final seconds the Bearcats were trying to force overtime with a tying field goal. That's when Eain Smith and just about everyone else blew through the Cincy line to block it. It was nice to see WVU actually get the break in the kicking game for once.
Game 11. WVU v Pitt: The Stedman Bailey Stiff Arm. This needs no explanation.
Game 12. WVU at South Florida: Stedman's Diving Catch. Maybe the bigger play was Shawne Alston getting a woozy Bailey lined-up for the spike.
Posted by Chris at 10:07 AM No comments:

Da'Sean Butler: Opened camp with the San Antonio Spurs, but was waived yesterday. FUTURE: Could easily find a place overseas to play, but could elect to play in the D-League to stay close to the NBA.
Devin Ebanks: Starts his second year with the Los Angeles Lakers. FUTURE: The team exercised his contract, and Ebanks will likely get a chance for some more playing time if he can adjust to playing more shooting guard and small forward.
Casey Mitchell: Was invited to attend camp in Houston. Mitchell was then waived earlier this week. FUTURE: Will be headed back to Sioux Falls in the D-League, where he has had a nice start to the season.
Joe Alexander: Currently playing in Russia for BC Krasnye Krylia. FUTURE: Tough to say at this point, but might be overseas for the foreseeable future. He had an outstanding season in the D-League last year and never got a sniff.
Posted by Chris at 8:52 AM No comments: 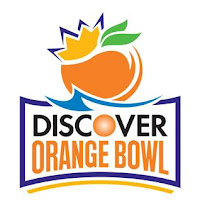 Clemson's Mike Bellamy will be suspended through the Orange Bowl.
Clemson's Sammy Watkins and WVU's Broderick Jenkins are being investigated after their names ended up on a promotional flyer.
The Mountaineers are actually going to practice before a bowl this year.
More honors for some of West Virginia's finest.
Austin also grabbed Second Team All America from Yahoo! Sports.
UPDATED: Austin 3rd Team AP All-America
Posted by Chris at 7:40 AM No comments: