Rumors continue to swirl about the future of West Virginia in regards to conference realignment. With Missouri's board of curators meeting tomorrow, maybe an answer will come sooner than later. Will WVU be heading down south to the SEC? Or, will they be thrown in with the big boys of the Big 12? Well, One thing is for sure, there is no way that the Mountaineers should settle for staying in the Big East. The conference is atrocious, and wants to add schools (Air Force, Navy, East Carolina) that will undoubtedly kill the automatic qualifying status. The future isn't bright in the Big East. Actually, the future is horrible.
I'm done trying to defend this pathetic excuse of a football conference. Just look at what happened this weekend. Two teams lost to non-AQ schools, a ranked USF failed to show up again on national television Thursday night, and Syracuse v Rutgers may have been the worst football game in the history of the sport (21 penalties, 9 turnovers, 4 missed FG's). Only Cincinnati, West Virginia, and Pittsburgh looked like actual football teams, and one of them already has one foot out the door.
This conference is dead. D-E-A-D. I don't care if WVU has to go independent and gets a television deal with Lifetime. I don't care if the Mountaineers accept an invitation to the Sunbelt. Everyone has a brighter future than the Big Least.
I've tried to stay level-headed about all of this, but not anymore. I'm in officially panic mode. Actually, it's probably more like Irrational Mode. If WVU is stuck in this dumpster of a conference, I just don't know what to do...well...other than cheer for that big conference win over SMU.
Hey John Marinatto, Glenville State is probably looking for a conference. let's invite them too!
Posted by Chris at 1:27 PM No comments:

Kevin Jones one of 50 finalists for the Wooden Award 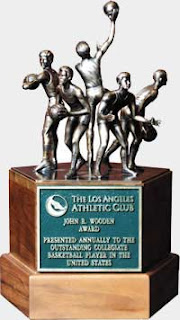 West Virginia senior forward, Kevin Jones was named one of 50 players on the Wooden Award preseason watch list. Jones is coming off an up and down junior year, where he helped his team reach the round of 32 in the NCAA Tournament.
Jones enters his final year, looking to improve on his 13.1 points and 7.5 rebounds per game. He will also be the leader once again on a fairly young team that could see at least two freshmen in the starting lineup. West Virginia opens their season on November 11th against Oral Roberts.
The Wooden Award goes to the Player of the Year and All-American selections. It is voted on by sportswriters from around the nation. Other Big East players on the Watch list are Tim Abromaitis (Notre Dame), Ashton Gibbs (Pittsburgh), Scoop Jardine and Kris Joseph (Syracuse), Darius Johnson-Odom (Marquette), Jeremy Lamb and Alex Oriakhi (UConn), Peyton Siva (Louisville), and Maalik Waynes (Vilanova).
Posted by Chris at 11:55 AM No comments:

Big East play is here. What does this mean for WVU? Well, it should mean seven wins. Will it mean seven wins? Only time will tell, but if WVU plays to its potential I just don't see any of these teams beating the Mountaineers. But, that's why they play the game.

Has Dana Holgorsen finally found a primary back? For now. Dustin Garrison's coming out party against Bowling Green was outstanding. However, will his production continue? That's the question. Even if he slows, Shawne Alston and the other young backs should be there to pick up the slack. The holes are now there to take advantage of thanks to the improved offensive line.

Special Teams still an issue. Corey Smith needs to figure out how to consistently punt or he is going to be out of a job. And the coverage is worse than shaky. Only WVU can make 11 guys like like four in coverage. This has been an ongoing problem for the last five-or-so years. At some point you would think it would get better. Apparently not. Maybe its the Curse of Bill Stewart...who yes, used to coach Special Teams.

Can the defense slow down Lyle McCombs? It will probably be the objective. Much better to have Johnny "Trickshot" McEntee try to beat you than a solid rushing attack. McEntee hasn't been efficient this season, which could play right into the hands of the WVU secondary.
Posted by Chris at 11:31 AM No comments:

West Virginia improved to 4-1 with an impressive 55-10 win over Bowling Green. Dustin Garrison was the story, as the Mountaineer ground game destroyed the Falcons all game long. Too bad nobody was there to see it.
Most Valuable: Dustin Garrison. The kid was fantastic. In his first start, Garrison rushed for 291 yards and scored two touchdowns. He averaged over nine yards per carry, as West Virginia finally found a running game. The offensive line gave Garrison some huge holes, but the freshman showed plenty of skill to hit that hole, and strongly hit the second level. Look for Garrison to be the number one back moving into conference play.
Least Valuable: Corey Smith. Yes, this is a little picky, but WVU didn't have a lot of problems in this game. However, punting continues to be brutal. Smith only had one punt against Bowling Green, and it went a whopping 14 yards. In the last two games, Smith has two kicks of 14 yards, and one for 27. WVU continues to be last in net punting. This isn't much of a surprise considering the kick coverage is shaky as well.
Most Surprising: Um...hello...291 yards from Dustin Garrison. Sure, the ground game was going to get going at some point. But 291 yards from a freshman? Just fantastic.
Least Surprising: Weak Attendance. The stadium holds 60,000, but just 46,000+ were there to see it. Sure, the weather was poor, and the competition wasn't sexy. However, if Mountaineer fans want to be compared to the best, then that stadium needs to be filled for every game. And, once again, the students show their true pathetic colors, with scores of empty seats. Way to man up, students!
Play of the Game: Travis Bell Fumble Recovery. First kick of the game finally brought WVU its first fumble recovery of the year...in the fifth game of the season. Funny thing is Boo Boo Gates nearly got clear. If it wasn't for the Eain Smith strip, who knows how far Gates is running. The fumble set up a WVU field goal, and 52 points later, the Mountaineers called it a day.
Grades:
Quarterback: Geno Smith had a good day. Completion percentage was a bit low, but still made plenty of big throws to help WVU to the easy victory. Smith also went to the rush more often on the run/pass option. Apparently those choices worked well.
Grade: B+
Running Back: The group played well. Dustin Garrison was on fire, and Shawne Alston also went for two touchdowns. Garrison did lose a few balls, but the Mountaineers were lucky enough to retrieve them. But, rushing for over 300 yards makes you forget about those.
Grade: A
Wideout: The group wasn't used as much, but still solid when needed. There were a few drops, but really did fine in a rainstorm. The receivers also helped the ground game quite bit with decent blocking.
Grade: A-
Offensive line: The blocking was outstanding, as the balanced attack couldn't be stopped. Not one group has improved as much as the o-line.
Grade: A
Defensive line: Better pressure this week from the boys up front, creating sacks and turnovers. Needs to be more consistent.
Grade: B
Linebacker: Injuries forced some youngsters to play significant minutes, and did well. Tackling remains an issue, but the effort and intensity were there.
Grade: B
Secondary: Caused havoc on the Bowling Green passing game. Coverage was tight, and took advantage of every opportunity given. Three interceptions highlighted the big day.
Grade: A-
Special Teams: Tyler Bitancurt was perfect, but kick coverage and punting continue to be a huge issue. This group still needs major improvement.
Grade: C-
Coaching: No true complaints for the offense and defense. And, special teams problems may be more about players than schemes. The coaching staff seems poised for conference play.
Grade: A-
Posted by Chris at 7:45 AM No comments: