The Art of the Port-a-John Dive

Many moons ago in Morgantown, one could walk with 60,000 of their friends up a hill towards an enormous gold and blue church and witness an endangered species.

It hasn’t been seen for many years. 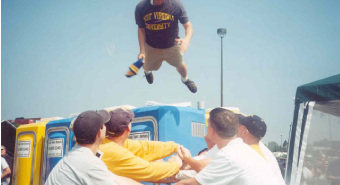 A crowd would gather at the base of the alter. All would burst into song. “It’s West Virginia…It’s West Virginia…” Thousands would clap. The diver’s hat would wave through the crisp mountain air, begging to heard.

“Hail to West Virginia, Hail!” the crowd would bellow.

The hat would fly into the throng.

And the diver would leap from his royal blue perch. Into the locked arms of his brothers below.

Week by week. Season after season. A tradition that REALLY was like any other.

Posted by DookieStyle at 9:01 AM No comments: