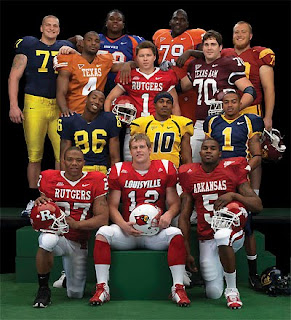 Mountaineer football is very steeped in tradition. But things were changing in the 00’s. New coaches. New offensive philosophies. WVU was back in the national mix.

In 2007, Steve Slaton showed up in Playboy magazine rocking an all gold WVU strip in their preseason All-American college football issue.

Blue helmet. All gold, head to toe. It WAS interesting. It was different. The WVU football program was on “jet.”

However, I’ve always maintained that these uniforms are an eyesore.

Up to that point, WVU had maintained a pretty standard uniform, almost always wearing a blue top with gold pants. You knew WVU was playing at home. Not only was it pretty much tradition, but it could even be called a whole state’s identity.

I just happen to find the all gold uni’s ugly.

Upon hearing the news that WVU would be sporting the all golds, I groaned. Why. We’re playing a team with the same gold in their uniform. Gold helmets to be exact, and gold pants. That’s a lot of gold on the field at one time.

I get it. When we have a “Gold Rush,” everyone in the stands wears gold. The team wears gold. It looks great on TV, and great for recruiting.

HISTORY OF THE ALL GOLDS (I researched this by looking up photos from every game played. I could have missed some, but I feel pretty accurate about this.)

As much as I hate them, and will continue to hate them, you can’t argue with the record. Surely that played a part in the decision to wear them.

And wear gold to every Mountaineer Game!
UPDATE:
Editors Note: I knew my research would be flawed. Thanks to Snider for pointing it out.

As much as I hate them, and will continue to hate them, they do have a winning record. Surely that played a part in the decision to wear them. But its important to note that we had the biggest loss in our program's history wearing the golds.
Posted by Chris at 11:44 AM